To open my mailbox like someone opening a surprise box and to feel the pleasure of discovery unleashed by an envelope decorated with stamps.
To be part of the world and also to discover it this way, with the help of those who share this vision.

Postcrossing postcard sent on the 14th July inside cover #145, received on 27th July

Postcard image: Monument to K.E. Tsiolkovsky "Man with a bycicle" on Theatre Street; Monument Girl with an umbrella (Kirov Street)

Kaluga is a city with 325,000 inhabitants (data of 2010) located 150 Km southwest of Moscow. the images on the postcard Julia kindly sent me inside cover #145 highlight two of the city's public art items, in the form of two metal sculptures, one of  K.E. Tsiolkovsky and the other of a lady with an umbrella. 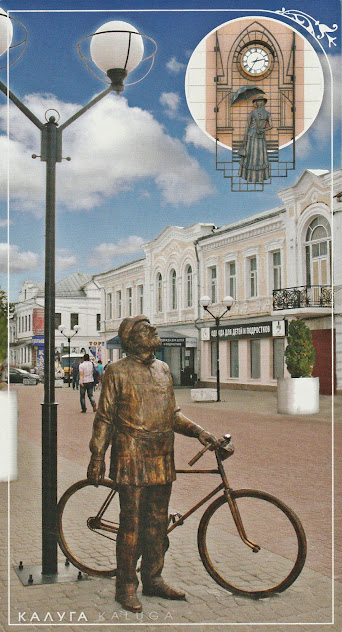 Konstantin Eduardovich Tsiolkovski ... (well, this is really rocket Science) was a Russian and later Soviet Scientist and mathematician  and a pioneer in the rocketry and astronautics fields, who lived most of his life in the outskirts of Kaluga.
According to the ESA website he was the first to determine that "the escape velocity from Earth into orbit was 8 km/second and that this could be achieved by using a multi-stage rocket fuelled by liquid oxygen and liquid hydrogen. During his lifetime he published over 500 works on space travel and related subjects, including science fiction novel".
still quoting from ESA's website:
"Among his works are designs for the construction of space rockets and ideas for steerable rocket engines, multi-stage boosters, space stations, airlocks for exiting a spaceship into the vacuum of space, and closed cycle biological systems to provide food and oxygen for space colonies. This is a remarkable achievement by any standards, but particularly as many of these documents were written before the first aeroplane flight and, by a man who had had to abandon his formal education at the age of 10".
Account taken of this little biography, it comes as no susprise that  the lovely statue honouring him on Theatre Street in Kaluga, shows him looking up, towards the stars... and beyond. Quite fitting for a man who once wrote
Earth is the cradle of humanity but one cannot live in the cradle forever!
The other sculpture highlighted in a thumbnail in the postcard is of a lady with an umbrella. This is a "flat" sculpture, that looks quite nice to my eye,  but I could not find any information about it.
Thank you so much, Julia, for another beautiful postcard.
at July 31, 2022
Email ThisBlogThis!Share to TwitterShare to FacebookShare to Pinterest
Labels: Postcards, Postcrossing, Russia

View my complete profile
Dear fellow collector
I'd be more than willing to swap covers with nice stamps with people from around the world. Please email me first at pnsoares1@gmail.com.

When things good have gone better...